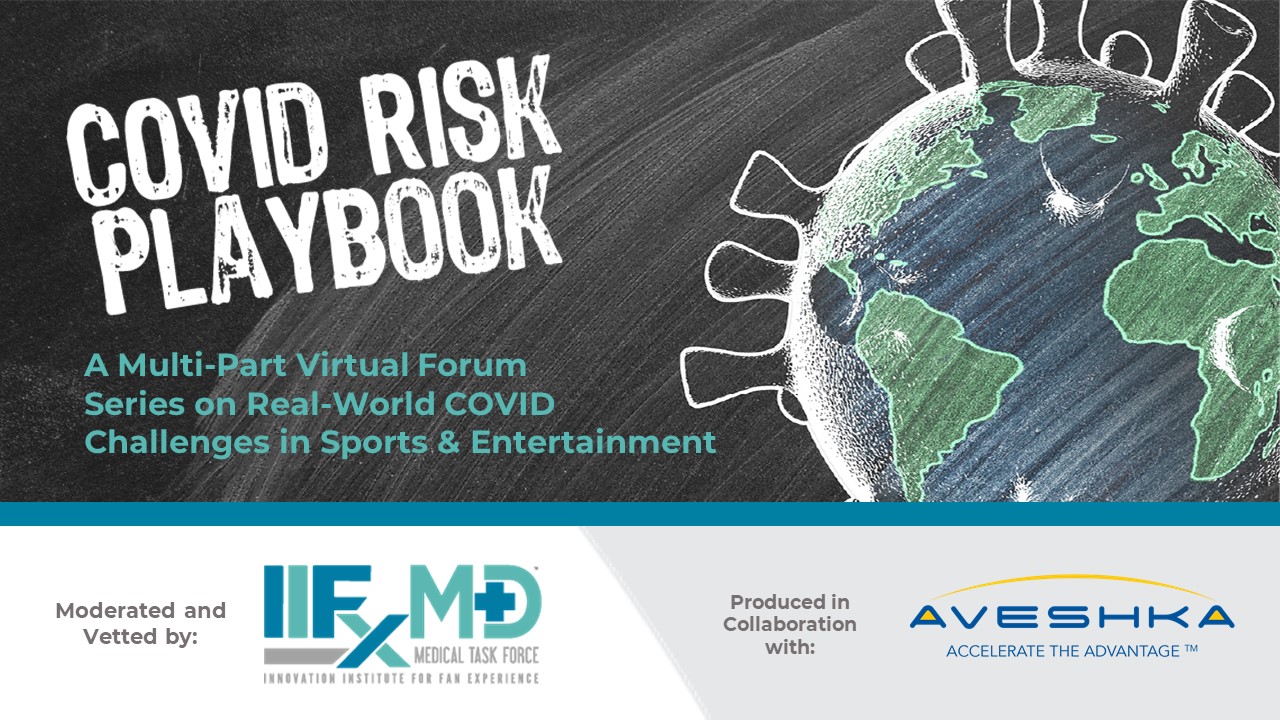 Series Moderated and Vetted by

Produced in Collaboration With

Look for the COVID RISK PLAYBOOK

on the IIFX YouTube Channel and our Podcasts on Apple iTunes, Spotify, Google Podcasts, and through other podcasts sites.

What is the Medical Risk for Returning to Play & Spectate?

As a Pediatric Science Consultant, Senior Advisor, Dr. Anderson provides support from a pediatric perspective to the U.S. Department of Health and Human Services (HHS) Office of the Assistant Secretary for Preparedness and Response (ASPR).

His pediatric expertise sheds light on the overall impact the pandemic has had on children, including emotional, social and developmental effects, the impact on children with special healthcare needs, and the increase of secondary diseases in children.

As a highly acclaimed pediatric critical care specialist, Professor of Pediatrics and Children’s Hospital leader, Dr. Anderson has published and presented on pediatric topics including safety/high reliability, pediatric disaster preparedness, and physician workforce. Prior to joining Aveshka, he served as President and SVP, Children Care of UCSF Benioff Children’s Hospital and as Chief Medical Officer for University Hospitals in Cleveland Ohio. Previously, as President George W. Bush’s appointee, he served as Vice Chair of the National Commission on Children and Disasters. In 2014, Dr. Anderson was appointed by the Obama Administration to chair the National Advisory Committee on Children and Disasters at HHS.

Dr. Anderson enjoys travel, swimming, and most especially spending time with his children and twin toddler grandchildren in Ohio.

Dr. Karissa Niehoff has worked in public education and education-based athletics since 1989 as a teacher, coach, athletic director, principal, state association executive director and, since August 2018, as executive director of the National Federation of State High School Associations (NFHS).

Prior to becoming the first female executive director of the NFHS, Niehoff served eight years with the Connecticut Association of Schools-Connecticut Interscholastic Athletic Conference (CAS-CIAC), first as deputy executive director for six months and as executive director from January 2011 until joining the NFHS in 2018. Niehoff began her career in Connecticut public education in 1989 as a physical education instructor at Greenwich High School. She was a highly successful field hockey coach at Litchfield High School and Joel Barlow High School with four conference titles and one state championship. She also coached high school volleyball, softball, basketball and track. In 2000, Niehoff was appointed assistant principal of Har-Bur Middle School in Burlington. Four years later, she assumed the position of principal of Lewis Mills High School, a post she held until joining the Connecticut association. At the national level, Niehoff served on the NFHS Board of Directors for three years prior to joining the staff, including a term as president-elect. She was chair of the NFHS Field Hockey Rules Committee and served a term on the NFHS Student Services Committee. Niehoff also served 10 years on the United States Field Hockey Association Board of Ethics and was the field hockey program leader in 1996 at the International Youth Camp during the Olympic Games in Atlanta. Niehoff served on the Education Committee of the United States Olympic Committee, authoring the “OlympiKids School Celebration Guide,” acting as U.S. delegate to International Olympic Academies in Greece and Canada, and representing the USOC at numerous national conventions, conferences and educational programs. She was co-founder and dean of the “Passing The Torch” Academy For Youth Sport Leadership, a USOC initiative to promote leadership and the spirit of Olympism within the realm of youth sport. In 1997, she coached a girls basketball team at the World Scholar Athlete Games, which involved more than 2,000 coaches and athletes.

Andre’ started his teaching career in the Houston Independent School District.  He taught Math, History, and Physical Education as well as coached football, basketball, and track.  He served as an Assistant Principal at Key Middle School and Kashmere Senior High School.   In 2012, Andre’ joined the district’s Athletic Department where he served as the Senior Athletics Program Administrator and the 18-6A District Executive Committee Chairperson.  He currently serves as the Director of Athletics and UIL Activities for Houston ISD.

He is married to Tiffanie Walker and they have two sons –Andre’ Walker II and Aiden Walker.

Guy M. Grace has worked in the security field for 35 years. He served for over three decades  as the Director of Security and Emergency planning for Littleton Public Schools, a suburb of Denver, Colorado before retiring in August 2020. Guy was recognized as the 2020 Campus Safety Director of the Year for his work at Littleton Public Schools. Guy is also a recipient of many other national and security industry awards and recognitions including: the Association of School Business Officials International Pinnacle award, Security Magazines Most Influential People in Security, The 2014 American Red Cross Century of Heroes award, the Security Industry Association (SIA)Insightful Practitioner Award, the NSCA 2019 Volunteer of the Year Award and the 2019 NCS4 Professional of the Year Award Guy is a regular speaker at school safety trade conferences and a regular security media commentator for various trade magazines and media. He has very diverse hands-on experiences in school safety regarding technology, processes and emergency response. He also serves as the Chairman of the Advisory Committee for Partner Alliance for Safer Schools (http://passk12.org/) and advisor for the NCS4.

For more on Guy Grace, check out this spectacular article regrading the work he has done for Littleton schools:

Nancy Beatty joined PDS in 2013 and serves as the Director of Athletics. Beatty’s responsibilities include the management of all areas of the Charger athletic program including budget, personnel, scheduling, athletic facilities, academics, public relations, Charger Club, and the overall well-being of the student-athletes and coaches. Beatty works directly with the Head of School to ensure the school’s mission and vision are echoed throughout the athletic program.

Prior to PDS, Beatty served as an educator, athletic director, and girls’ basketball coach for both Pinewood Preparatory School in Summerville, SC, and St. Vincent- St. Mary High School in Akron, OH. With 25 years of coaching experience, Beatty has led five basketball teams to state titles, earned 16 Coach of the Year honors, and assisted 20 of her former players with collegiate signings.

As an educator and administrator at Pinewood Preparatory School, Beatty was the first physical education teacher to be awarded Master Teacher in 2009 for the South Carolina Independent Schools Association (SCISA). She also was instrumental to introducing three new varsity sport programs and served as project manager for the baseball lighting project. In acknowledgment of her accomplishments, she was the recipient of the SCISA Volunteer Athletic Director in 2012.

In addition to her passion for coaching basketball, Beatty has coached volleyball, cross country, and softball teams to several district and regional titles. From 1997 to 2002, she served as a collegiate assistant women’s basketball coach at The University of Akron in Akron, OH, and The College of Charleston in Charleston, SC, where she was responsible for recruiting, team travel, and game management for both programs. Beatty completed her Master of Education in 2006 from Southern Wesleyan University and earned her bachelor’s degree in science from Kent State University in Kent, OH.

What is the Medical Risk

for Returning to Play & Spectate

An email will be sent with your registration information

Add THE WEBINAR TO YOUR CALENDAR BELOW

FANCENTRIC TECH IS MOVING TO JULY 2023