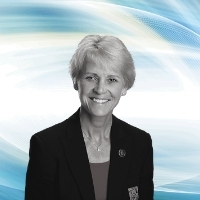 Dr. Karissa Niehoff has worked in public education and education-based athletics since 1989 as a teacher, coach, athletic director, principal, state association executive director and, since August 2018, as executive director of the National Federation of State High School Associations (NFHS).

Prior to becoming the first female executive director of the NFHS, Niehoff served eight years with the Connecticut Association of Schools-Connecticut Interscholastic Athletic Conference (CAS-CIAC), first as deputy executive director for six months and as executive director from January 2011 until joining the NFHS in 2018. Niehoff began her career in Connecticut public education in 1989 as a physical education instructor at Greenwich High School. She was a highly successful field hockey coach at Litchfield High School and Joel Barlow High School with four conference titles and one state championship. She also coached high school volleyball, softball, basketball and track.

In 2000, Niehoff was appointed assistant principal of Har-Bur Middle School in Burlington. Four years later, she assumed the position of principal of Lewis Mills High School, a post she held until joining the Connecticut association.

At the national level, Niehoff served on the NFHS Board of Directors for three years prior to joining the staff, including a term as president-elect. She was chair of the NFHS Field Hockey Rules Committee and served a term on the NFHS Student Services Committee. Niehoff also served 10 years on the United States Field Hockey Association Board of Ethics and was the field hockey program leader in 1996 at the International Youth Camp during the Olympic Games in Atlanta.

Niehoff served on the Education Committee of the United States Olympic Committee, authoring the “OlympiKids School Celebration Guide,” acting as U.S. delegate to International Olympic Academies in Greece and Canada, and representing the USOC at numerous national conventions, conferences and educational programs. She was co-founder and dean of the “Passing The Torch” Academy For Youth Sport Leadership, a USOC initiative to promote leadership and the spirit of Olympism within the realm of youth sport. In 1997, she coached a girls basketball team at the World Scholar Athlete Games, which involved more than 2,000 coaches and athletes from 150 countries.

Dr. Karissa Niehoff is the first female chief executive officer of the National Federation of State High School Associations (NFHS) and only the sixth person in the 101 years of the organization to hold the position on a fulltime basis. Currently, she is the only female chief executive officer among the leaders of the national organizations for high school, college and professional sports.

During her 31-year career in education at the middle school and high school levels, she has been a leader
every step of the way – as a teacher, coach, athletic director, assistant principal, principal and executive director
of a state high school athletics association.

Niehoff has been executive director of the NFHS for 2½ years, having joined the staff as the NFHS’ sixth fulltime chief executive on August 1, 2018. After taking the time to listen to staff members, the 51 member state high school associations and other outside groups, she began to move the organization forward to a more prominent level of national presence.

Ironically, her first year as executive director involved leading the organization through a year-long celebration of its Centennial, culminated by the 100th Summer Meeting last year in Indianapolis. After the 2019 Summer Meeting, a new logo and branding initiatives were launched, and Niehoff has led the organization to a
more prominent position as the national leadership organization for high school sports and performing arts
programs.

Through more aggressive marketing and communications strategies, the NFHS has been able to share its messages about the benefits of high school activity programs to more groups through a heightened presence in the mainstream media and social media. In August 2019, she implemented a weekly op-ed entitled “The NFHS Voice” which continues to gain traction with national media as well as the NFHS membership. In her short time as NFHS executive director, Niehoff has opened the door to relationships with many outside groups, including National Governing Bodies, the NCAA, national coaches organizations and youth sports groups.

As a champion of life-long learning, collaborative thinking and teamwork, Niehoff has created ongoing professional development opportunities for the NFHS staff. Her collaborative mindset has brought value to employees at all levels within the national office and has created more of a “thought partnership” culture.

This year, she has led the implementation of the NFHS Center for Officials Services (COS) as a service for high school contest officials and led the organization as it has assisted and guided member associations through the shutdown of activity programs due to the COVID-19 pandemic and the return of programs last fall.

In 2020, her efforts to ensure the long-term viability of high school football paid dividends with the announcement of a first-ever partnership between the NFHS and National Football League (NFL). As a part of the partnership funded by the NFL, the NFHS – with the help of a newly hired senior consultant – will work to develop and execute a strategic plan intended to identify, inform and educate participants, partners, associations, government and media around the benefits and values of participating in high school football.

Among her other accomplishments since becoming executive director of the NFHS, she signed Butler
University to direct a 10-year research study to assess the value of high school sports and activity programs from
the perspective of students’ mothers.